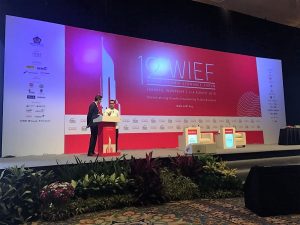 Chef Paco Morales has presented his innovative Halal ‘haute cuisine’ at the 12th World Islamic Economic Forum (WIEF), in Jakarta (Indonesia), attended by 4200 delegates from more than 70 countries. Paco Morales attended the forum together with the Instituto Halal, the leading Halal certification body in Spain, with headquarters in Cordoba.

WIEF attendees enjoyed a ‘Halal cooking show’ by the Cordoban chef, who has become the first to specialise in Halal ‘haute cuisine’ which he offers in his restaurant Noor (“Light”, in Arabic), located in Cordoba. His innovative dishes combine Andalusi cuisine (from Al-Andalus period, 8th to 15th centuries), Halal certified food and cutting-edge cooking techniques.

After the ‘Halal cooking show’, Paco Morales entertained the attendantees with a tasting of one of his latest creations: the Andalusi Alfajor.

In his restaurant Noor, Paco Morales recreates Andalusi cuisine for the first time, reinterpreted through ‘haute cuisine’ dishes, after working in renowned El Bulli, Mugaritz, Hotel Hospes Madrid (Senzone) and running the restaurant of Hotel Ferrero in Bocairent (Valencia), where he obtained a Michelin star.

The Cordoban chef has carried out historical research on the recipes, cooking traditions and products used in Caliphate of Cordoba, utilising products brought from the New World, in order to produce a genuine repertoire.