The Halal Institute and IMANOR meet in Rabat 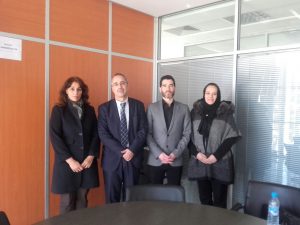 The Halal Institute and IMANOR, Institut Marocain de Normalisation, met on 7 March in the Moroccan capital in order to make progress on the collaboration established between both parties over the past year.

Both institutions are making progress in developing the mutual recognition agreement they signed last year. To this end, a delegation from the Management Committee of the Halal Institute travelled to the Moroccan capital where they looked at, along with their Moroccan counterparts, specific actions and projects that would allow the objectives set in the jointly designed Work Plan to be achieved.

‘»Going beyond the mutual recognition and good relations maintained between the two institutions, we want to work together in areas and projects of mutual interest, such as standardising the Halal concept and protecting the use of a term that for more than 25% of the world’s population means permitted and licit, but that is also associated with important values such as health, ethics and economic and environmental sustainability», said Hanif Escudero, Director of Standardisation at the Halal Institute.

One of the most important aspects addressed was the recognition of Spanish Halal products, which can be exported without the trade barriers related to Halal Certification. According to Escudero, «the Halal Institute is currently the only Spanish Halal certification institution recognised by IMANOR, which means, in practice, that the trade in Halal products between Spain and Morocco is standardised, thus fostering good relations between the two countries and improving the access and competitiveness of Spanish companies in a nearby market that has almost 40 million potential consumers, and which represents a gateway to the African market, especially after the incorporation of Morocco into the African Union. Spanish companies will also be able to count on the provision of raw materials, ingredients and all types of primary products originating from Morocco, which have the Halal Certification from IMANOR.

During the meeting, held at the IMANOR offices in Rabat, there was also discussion of aspects relating to knowledge, education and training, which both parties deem to be essential for consolidating the global presence of the Halal concept. In this regard, a proposal was made on the possibility of organising training activities, aimed at educating the operators, technicians and managers of Moroccan companies interested in opening up new export markets, as well as Spanish companies that have Morocco as a preferred destination for their goods. As explained by Bárbara Ruiz-Bejarano, Director of the Halal School, «this meeting was very positive as it will allow us to organise a specialised course on the Moroccan market, improve awareness about the Halal trade and identify the profile of this type of consumer in the North African market».

Along this same line, both institutions have agreed on the importance of collaborating through the exchange of know-how, given the experience accumulated by the Halal Institute over almost 20 years of activity in the context of a European country where Islam is a minority, and the work carried out by IMANOR since 2009 in an African country with a Muslim majority. «This exchange of knowledge and the distinctive features of each country is essential for working safely and calmly in the market, so we will carry out joint activities such as visits to food industries, laboratories and other sectors such as cosmetics and logistics», explained Ruiz-Bejarano.