The Halal Institute begins to certify companies in Mexico 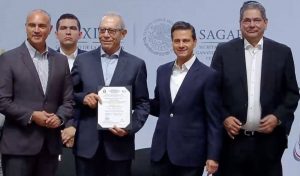 The Halal Institute, the leader in Halal Certification for products and services in Spain, will be responsible for certifying companies in Mexico, as part of the government’s strategy to diversify food and beverages exports to Islamic countries, led by the Secretary for Agriculture, Farming, Rural development, Fisheries and Food (SAGARPA), Mexico Calidad Suprema and ProMexico.

In the first stage of the project, the Halal Institute has certified 10 Mexican companies, 5 of them from the farming sector–SuKarne, Grupo Gusi, Bachoco, Buenaventura and Proboca–, and the rest, from the food sector –Grupomar, Nestlé México, Salsas El Yucateco, Descafeinadores Mexicanos and Rus Internacional–.

Last 8th December, the President of the United Mexican States, Mr. Enrique Peña Nieto, presented the first certificates issued by the Halal Institute to SuKarne and Grupo Gusi during the opening of the 1st edition of México Alimentaria Food Show 2016. During this event, the Director of the Halal Institute in Madrid, Mr. Tomás Guerrero, gave a speech on the opportunities of the Halal market for Mexico and its companies.

The other 8 certificates will be presented by Mr. José Calzada Rovirosa, Secretary of SAGARPA, in an event to be held next January, as the Halal Institute will start the second stage of audits, for 4 companies associated to Mexican Beef: Praderas Huastecas, Carnes Viba, Intergam and Karnika del Papaloapan.

The Halal Institute, which will open their new headquarters in Mexico City during the first term 2017, has a mandate from the SAGARPA to certify a number of Mexican companies, as the Latin American country does not have any Halal Certification Body with the necessary accreditations to reach the Muslim-majority countries.

Instituto Halal is dedicated to the promotion of a standardized halal market in Spain, through initiatives, actions and projects which favour the integration of the halal lifestyle as a global concept. The term “halal” makes reference to products and services which comply with Islam, and means “permitted, healthy, ethical, non-abusive” and therefore, beneficial for human beings, animals and the environment.

The Institute, with headquarters in Córdoba (Spain), is the main halal certification body for services and products intended for Muslim consumers, with a 15-year career and more than 300 clients in Spain, exporting products and services to more than 80 countries in the world.