The Halal Institute gets accreditation from United Arab Emirates

Dubai, 18th July 2017. The Emirati International Accreditation Centre (EIAC) has accredited the Halal Institute according to the standard GSO 2055-2 General Requirements for Halal Certification Bodies. It becomes therefore the only halal certification body in Spain with this recognition.

This accreditation proves the trust of the Emirati authorities in the professional and efficient work developed by the Halal Institute, and in its role to supervise that the strict halal requirements to export to the UAE are fulfilled. Also, it will enable the companies already certify by the Halal Institute to resume or to start exports to this Gulf country-

The awarding ceremony took place in the EIAC headquarters in Dubai and was conducted by Ms. Amina Ahmed Muhammed, CEO of EIAC. She delivered the accreditation to Mr. Muhammad Escudero, director of Certification.

After receiving the accreditation, Muhammad Escudero explained that “this achievement comes after years of dedication and effort, a period when the Halal Institute experienced a transformation in order to be able to apply a very strict certification model; it implied engaging and training new staff, increasing control measurements, and extending the scope and detail of the audits, which also led to a better understanding and management of the halal standards in the market”. 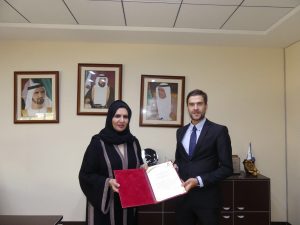 He added that “this accreditation by Emirates International Accreditation Center represents a milestone in the history of the Halal Institute and its leading position in the halal industry in Spain; it is also a great challenge, as the organisation has to integrate internationally awarded certification systems.

On the other hand, Tomás Guerredor, director of the Madrid office, who also attended the ceremony, stated that “EIAC’s accreditation must be added to the previous recognitions by Malaysia, Indonesia, Singapore and others, which enables the companies certified by the Halal Institute to export to each and every Muslim-majority country with a single certification, which significantly reduces certification costs and efforts”.

The Halal Certificate issued by the Halal Institute is a trust tool. Therefore, to be granted, companies must meet the requirements in the reference halal standards, and prove their conformity with these requirements, through audits, supervisions, tests, and other surveillance and control mechanisms.

The halal certification issued by the Halal Institute is also a protected trade mark, the use of which must be constantly evaluated, according to the Spanish Law of Trade Marks.

The Halal Institute continues expanding its international presence and prestige. After the agreement with the Mexican government, which includes the certification of 120 Mexican companies in 2017, and the opening of a new office, the main Halal Certification Body of Spain adds Malaysia and the United Arab Emirates to the countries which recognise its certificate.