The delegation was met by the Halal Institute, the Town Hall, the Confederation of Enterprises and the Chamber of Commerce 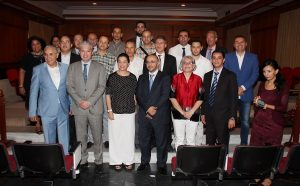 Cordoba (Spain), July 15th.- A delegation of Algerian companies visited Cordoba yesterday, on a commercial mission co-sponsored by the Spanish-Algerian Commercial Circle, the Halal Institute and the authorities of Cordoba.
The delegation was also accompanied by a representative of the Algerian Embassy to Spain. They were welcomed by the Major, Isabel Ambrosio and had a meeting with the city’s authorities in order to explore investment opportunities in the Halal Cluster. Isabel Romero, director of Halal Institute and Victor Montoro Manager of the Instituto Municipal de Desarrollo Económico Local (IMDEC) presented the Halal Cluster which is currently being set up in the city, with a nation-wide scope. Several companies showed a genuine interest in investing in Spain.
Halal Tourism figures also attracted the attention of the Algerian delegates, as Cordoba attracts ca. 1,1 million tourists yearly. The potential demand for halal products and services is not yet met by the expected offer. Specific halal products (such as food, beverages, cosmetics, delicatessen, etc.) and services (lodging, banking, entertainment, etc.) are increasingly demanded worldwide. The sector is a strategic one for the economic development of the city and Spain is one of the top destinations for Muslim tourists from all over the world.
Another sector in increasing demand is that of logistics and export platforms. In the case of halal products, the necessary integrity to preserve the nature of halal products is also a concern which is driving the sector towards developing more dedicated and sophisticated services.
However, most of the commercial exchanges were focused on the agro-food sector. This sector concentrates relevant exports from Spain for halal-certified products. Certification services, such as those provided by the Halal Institute, were of particular interest for Algerian companies, which now outsource many ingredients in non-Muslim countries and want to ensure they are shariah-compliant.
Next point in the agenda was a meeting with a Spanish delegation in CECO (Cordoba Confederation of Enterprises). Both sides introduced their companies and interests and there was opportunity for a first round of commercial exchanges.
The agenda scheduled a B2B round of meetings which lasted all afternoon and allowed both the Algerian and the Spanish delegations to strengthen ties or to launch new ventures. By the end of the day both parties were satisfied and stated that the mission had been a success and that it should be held regularly in both sides of the Mediterranean. It is expected that this mission is followed by a visit to Algeria in the forthcoming months.