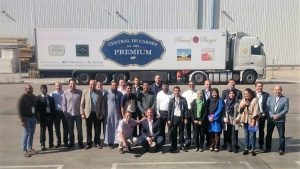 Halal Certification Bodies (HCBs) from Europe and Africa, gathered in a seminar co-organized by the Halal Institute of Spain (Instituto Halal), the Agency for Islamic Development of Malaysia (JAKIM) and Dagang Halal (Halal Commerce), the biggest B2B halal platform in the world. The seminar focused on technical aspects of Halal Certification for Malaysia.
Participants included representatives of HCBs such as International Center for Halal Standardization and Certification (Russia), Halal Office of Control and Certification Madagascar (Halal Madagascar), MJC Halaal Trust (MJCHT), from South Africa; Halal Institute of Portugal, and the Agency for Halal Quality Certification Bosnia Herzegovina.
The Halal Institute is an organization devoted to the promotion of the Halal concept and the major halal certification body in Spain for products and services, intended for Muslim markets. The certification process depends on the previous accreditation of the HCB by the destination country’s authorities. In the case of Malaysia, this authority is Jabatan Kemajuan Islam Malaysia (JAKIM).
The General Manager of Instituto Halal, M. Isabel Romero, has pointed out that the objective of the seminar is to “strengthen the trade links between the two countries and to boost exports towards the Asian giant”. Romero explained that “this is the first of a series of activities organized between the Halal Institute and the Malaysian Government to develop the “Halal Concept”, with the purpose of promote the implementation of the Malaysian Halal Standards, which have a remarkable international impact, as well as to promote commercial relations between Spain and Malaysia”.
The seminar was opened by H.E. Khaeriak Zaehera Abd Kayyum, Head of Chancery of the Malaysian Embassy to Spain, and the Director of Certification of Estándar Global de Certificación, Mr. Muhammad Escudero. During three days, the attendants will be trained in topics such as responsibility, protocol, structure and administration of HCBs, the Halal Audit process, Halal Certification, ingredients, testing, etc.

The intense training program also included the visit to Brand T Burger, of Los Norteños Group, in Mercamadrid. The company is the leader in halal beef meat exports to Morocco. Brand T Burger is the first company outside Morocco to be certified halal by the Moroccan official organization IMANOR.

Consequently, 2015 was the first year with a positive result for Spain, with a slight trade surplus of 36 M EUR, and a trade coverage of 105%, supported by a record figure of exports (745 M €). It must be added that the exports in 2015 were notably influenced by the sale in March 2015 of an Airbus A400M to the Malaysian air forces. Two other sales such as this are expected to happen in 2016.

On the other hand, exports from Malaysia in the first term of 2016 represented 153 M EUR, with year-on-year reduction of 25%. They are mainly vegetable oil (25% of the total), raw materials and natural rubber semi-manufactures (11% of the total) and other chemical products (7% of the total).