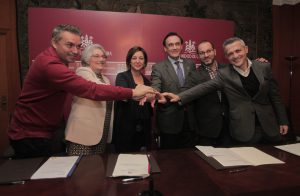 The project is also promoted by the Town Council and the main regional, autonomic and national institutions, through Agropolis Foundation

Ms. Isabel Romero, director of the Halal Institute (Instituto Halal) participated last Wednesday in the signature, by the Mayot of Cordoba, of the statement for the promotion and constitution of the Halal Cluster, which will take the form of an Innovative Enterprises Cluster. According to Cordoba Mayor, Ms. Isabel Ambrosio: “This is a turning point for Cordoba due to the importance of the initiative”.

The founding organizations include the Halal Institute, Cordoba Town Council, Cordoba University (UCO), the Institute for the Economic Development and Employment of Cordoba (Imdeec), MercaCordoba and Agropolis Foundation.

The first objective of the founders is to elaborate a Strategic Plan. The Mayor of Cordoba, Ms. Isabel Ambrosio, attended the event together with Ms. Isabel Romero, Director of the Halal Institute, Mr. José Carlos Gómez Villamandos, Principal of Cordoba University, Mr. David Luque, president of MercaCordoba, Mr. Víctor Montoro, manager of Imdeec, and Mr. Jesús Reina, representative of Agropolis Foundation and manager of MercaCordoba ,among other participants. 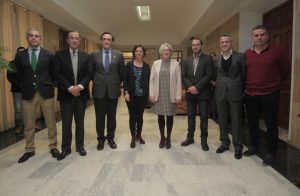 Photo: The Mayor of Cordoba, Isabel Ambrosio together with the Director of the Halal Institute, Ms. Isabel Romero; the Principal of UCO, Mr. José Carlos Gómez Villamandos; The President of MercaCordoba, Mr. David Luque; the Manager of Imdeec, Mr. Víctor Molino, and the representative of Agropolis Foundation and manager of MercaCordoba, Mr. Jesús Reina)

Ms. Isabel Romero, director of the Halal Institute (Instituto Halal) stated that the next step is to request the Ministry of Industry for the denomination “Halal Cluster”, before drafting the Strategic Plan for the development of the project. The constitution as Cluster allows access to Europe and to start launching activities. She remarked that in Cordoba there are already 22 Halal-Certified Enterprises, and more than 50 in Andalucía. She added “The Cluster is the tool that will help enterprises gain support and positioning, as they have committed to this emerging global market, and particularly in their activities in the next few years”. Because “Cordoba and Andalucía have a privileged position in the marketing goods between the great producers and the consumers, next to the North and Centre of Africa”. She also indicated that “more than 500 national and international SMEs intend to access the services offered by the Cluster, such as assessment, promotion, communication, organization of events related to the halal market and tourism, support services to attend specialized trade fairs, research and development, training and conformity assessment services in all areas of food safety and halal traceability, and professional halal certification services”, among others.

In a second phase, the cluster will promote a Halal Hub, as a specialised space with integrated services for the industries interested in relocating to the city and province, as a model for Europe and other neighbouring countries. The Director of the Halal Institute stated that the constitution of Cordoba Halal Cluster was “one relevant objective, which has the maximum institutional consensus, gather public and private organizations, to make it a successful project”. Now, the big challenge is “that Cordoba lives the Cluster as a project of their own”.

A turning point for Cordoba

The Mayor of Cordoba, Ms. Isabel Ambrosio, stated that this signature “represents a turning point for the city, because this is a decisive commitment for an initiative that the city could not miss, and that the opportunity to put them into practice cannot be missed”, and for which they “have been working for months”. In this sense, Ms. Ambrosio added that the purpose is “to become the current referent in Europe for the Muslim world, not only in the Food Industries, but also in the production of goods and services according to the requirements of the “Halal concept”; therefore, Cordoba is ready to lead the initiative. Also, the mayor explained: “currently, the term “halal” is a synonym of quality, health and sustainability”, reason why the Town Council is decided that “Cordoba will be the leader to implement a Halal Hub, with a strong bet for exports and services for Muslim visitors to Spain, and for all consumers of Halal goods”.

On the other hand, the Principal of Cordoba University (UCO), Mr. José Carlos Gómez Villamandos, defended “the commitment for development” of the project with the industry, and that the University “has been cooperating for this purpose for a number of years” with the Halal Institute” in the fields of “research and training intended for the agri-food sector; but new horizons are open, with research teams and qualified staff, such as technologies, tourism or chemistry”, he stated.